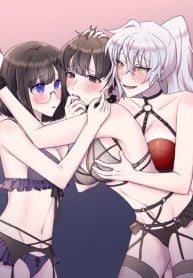 Taeyi has a reputation on campus for being extremely beautiful but a hard nut to crack. There’s a reason for that. She’d much rather enjoy the company of her toys than other people. She’s had enough of complicated and bothersome relationships with real humans. That is until a certain underclassman, Kim Ha-on, approaches her. After being convinced that she needs a partner to make the most of her new toy, she reluctantly let’s Ha-on in on her fun. But only on a strictly no strings attached basis! Things were supposed to be purely physical but it was only a matter of time before someone started to catch feelings Will Ha-on become Taeyi’s new favorite toy or just be thrown back in the box with the rest of them?